Starting in 2016, The National High School Golf Association started ranking the top girls high school golf teams in the United States. All of these rankings are based solely on the state high school golf tournaments from the Fall 2016 and Spring 2017 seasons. All state tournament scores were calculated and ranked using the USGA Handicap formula to ensure a stable benchmark for the difficult of golf course host sites. Calculation = ((Gross player score by day – rating) * 113/slope )). So who are the top 5 girls high school golf teams for the 2016-2017 season?

Austin Lake Travis, Texas– Lake Travis High School is a public high school in Travis County, Texas, West of Austin. The school is part of the Lake Travis Independent School District. Lake Travis had an impressive 2017 season, winning eight of ten tournaments and capped it off with a Division 6A State Championship. The team averaged an impressive score of 290 for the two day tournament (288 day 1 and 292 day 2). The Lake Travis team battled 15-20 mph winds in order to win the state tournament by 11 strokes.

Troy High School, Fullerton, California – Troy High School is a public high school in Fullerton, California, USA, acclaimed for its many programs including Troy Tech and International Baccalaureate. 2016 was the most successful season for the Troy Girls Golf program. This team won the Southern California Championship and their number 1 player Beth Lillie was crowned the Champion golfer of the year in California, but also the #1 player in the 2016-2017 Girls High School State individual rankings. Learn more about the Troy HS Girls Golf Team. 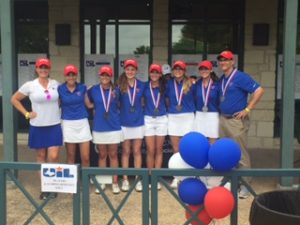 Want to see the full 2016-2017 Girls High School Golf Team rankings? If you have questions, comments or ideas about the National High School Golf rankings please send us an email at rankings@highschoolgolf.org.